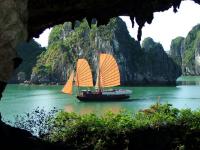 In spite of the thousand-year history with rise and fall, the national character of Vietnamese culture has been preserved and developed on the S-trip of land. They are unique habits and festivals; familiar cultural space of villages and quaters; simple way of life; passionate folk - songs; colorful costumes or banquet tray with country produce...

Although Viet Nam has experienced a long history, its beauty is still bright and impressive. Moreover, its beauty has been maintained and buil by many generations of Vietnamese people, so it is more and more attractive to tourists all over the world. They are infinite seas with smooth white sands, interesting caves, peaceful rivers or gigantic moutains.

Those beauties form a Viet Nam tourism picture which is full of vitality, unique, difference from those of other countries and has a great impression on tourists.

Located in the centre of Southeast Asia. Viet Nam bordes China to the north, Laos and Cambodia to the west, and the East Sea and  the Gulf of Thai Lan to the east Sea and the Gulf of Thailand to the east and the south. The main land of Viet Nam covers over 331,211 square kilometers with a total length of 1,650 km. The territory also includes thousands of islands and islets scattered along the coast. Among these are Truong Sa ( Spratley Islands ) and Hoang Sa ( Paracel Islands ). Viet Nam's coastline measures more than 3,260 km in length and its inland border is 4,510 km long.

Viet Nam lies in the tropical and temperate zones, so its climate is influenced by two monsoons. In the North, there are four seasons, with average temperatures of around 17oC in winter and 34oC in summer. In the South, the climate undergoes less variation with an annual average temperature of around 27oC in Ho Chi Minh City.

Around three - quarters of Viet Nam's territory consists of mountains and hills. Viet Nam has two major  deltas, the Red River Delta and the Mekong Delta, as well as four mountainous zones. They are the North-East, the North - West, the Truong Son Mountain Range, and the Central Highlands. Each of them possesses its own unique feature.

The Vietnamesse population exceeded 85 million in 2007 and consists of 54 ethnic groups. The largest ethnic group is the Viet ( Kinh ), concentrated mainly in the delta regions. Most of minority groups live in the highlands and mountainous areas.

Viet Nam is a nation with thousand years of history. Archaeological artifacts of the Phung Nguyen, Dong Dau, Go Mun and Dong Son cultures, especially discoveries of bronze drums of Ngoc Lu have proved that Viet Nam was a cradle of the developed civilisations before Christ. Vestiges of the historic revealed that Viet Nam is one  Southeast Asia.

Vietnamese culture national characteristics: There are 54 ethnic groups living in Viet Nam. Together they have built the country and fought for national freedom and independence against invaders. Many minorities have their own language, script and distinctive cultural identity. The cultural identity of each ethnic group is manifested through their communal life and the social-economic activities. Still, the ethnic groups of Viet Nam share some common virtures, including a strong work, ethnic kind-heartedness, altruist, resilience, and bravery.

Religions and rituals: Located near two major centers of culture, Idia and China, Viet Nam has absorbed a number of religions over time. Although imported from different countries, religions in practice in Viet Nam have demonstrated no sings of conflict, and exist in harmony, striving for multual development, and good secular and religious life. The Vietnamesse Law ensures the sovereignty and fredoom of religion and ritual.

For thousands of years, different religious practices have played major roles in the lives of the Vietnamese people including worshiping ancestors, village Spirit, and national heroes. Each ethnic group has tratitionally paid special attention to the worship of ancestors. These customs and habits remain today.

Festivals are a popular Vietnamese cutural activity. A festival, whether organized by a group living in the lowlands or highlands, is a chance for everyone to remember their origins and show their gratitude to those who had great merits for the nation. A festival is also a chance for people to exchange ideas, customs and habits to express their noble desire to love their country. Most Vietnamese festival are organized in spring or autumn, the most pleasant times of the year when the harvests have been completed. Among these festivals, Te Nguyen Dan ( Lunar New Year ) and the National Day ( September 2 ) are the most important.

Craft Villages: In many villages, in additions to cultuvating rice, vegetables and other crops, villagers produce traditional handicrafts. The skilles to create these crafts are handed down from generation to generation, with diligent artisans creating high - quality products. Traditional Vietnameses handicrafts are rich and diverse, including ceramic and porcelain making, silver engraving, wood carving, silk weaving, brocade production, and bamboo and rattan weaving.

Tourist visiting these craft villages are able to withness the expertise of Vietnamese craftsmen, and take home remarkable souvenirs.

Traditional costumes: The traditional attire of Viet Nam is another part of its unique cultural identity. Each ethnic group has its own cultural ifentity. Each ethnic group has its own costume designs, typically employing bright and contrasting colors such as black and white. Almost all traditional costumes are made from flax, cotton, or silk. There are diffirent types of costumes for people of diffirent age and gender and for different occasions, such as meetings, festivals, weddings, and funerals. However, nowadays, Vietnamese people typically wear western clothes.

The most important article of traditional dress is ao dai ( traditonal long dress), wich has been designed and stylized to the tastes of young girls. The present-day ao dai clings to the body helping to higlight the charming curvers of its wearer. When wearing the ao dai, women often put on a conical bamboo hat that makes them look both graceful and gentle.

Gastronomy: Viet Nam is an agricultural society known for wet rice civilization, thus, most Vietnamese dishes are characterized by rice and otherproducts of local agriculture.

* Nem ran is a very popular dish of Viet Nam and can be found on the menus of luxurious parties.

* Pho ( noodles soup ) is a delicious, simple dish Pho noodles are made from rice. There are up to 20 kinds of Pho, with Pho bo being the most popular. Hanoians Pho has become famous around the world.

* Banh Cuon ( steamed and rolled rice pancake ). A rice flour batter is spread over a steaming plate to make a thin wrapper which is rolled with pork, mixture of fish sauce, lemon and chili.

*In Hue, visitors should try com hen ( rice with mussels ), a Hue specialty.

It is rather finicky to prepare, but has an unforgettable taste. Visitors to Hue can take home some of Hue's specialies,such as a bottle of its shrimp sauce.

*Cao Lau ( Noodle soup ) is a traditional favorite of Hoi An. The noodles are made with specially selected rice, cooked over a slow fire.

It is impossible to count all of the traditional local dishes across Viet Nam. Although many are made from the same raw materials, the dishes have distinct local flavors.

The diversity of beautiful souvenirs available in Viet Nam makes it difficult for tourists to decide what to bring home. Some popular souvenirs include silk and brocade products, wooden articles, hand-embroidered items, products inlaid with mother - of - pearl, lacquer products, bamboo and rattan items, wooden furniture, bronze products and Dong Ho folk paintings, among many others.

If you want to test your bravery and strength, adventure tours might be for you. You will have unforgettable experience tours to conquer high pearks, among them is the notable Fanxipan Mountain - considered as the roof of Indochina; trekking tour through the northem moutains, along Truong Son Range, and the imposing Central Highlands; exploring caves and so on.

MICE tourism, abbreviated from the English; Meetings, Incentives, Conferences and Exhibitions. MICE tourism first appeared in Viet Nam in  early 1990s, and has prospered dramatically in the recent years. Viet Nam recently hosted successfully summit conferences, with meetings, seminars, exhibitions, and fairs, with the participation on organizations and individuals coming from many countries.