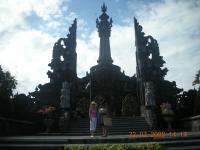 Jakarta is the capital city of the Republic of Indonesia, a country composed of more than 13,000 islands with a population of over 180 million. Comprising more than 300 ethnic groups speaking 200 different languages, the Indonesia population exhibits marked diversity in its linguistic, culture, and religious traditions. As the Capital City, Jakarta is a melting pot of representatives from each of these ethnic groups. Jakarta is a special territory enjoying the status of a province, consisting of Greater Jakarta, covering of 637.44 square km area. Located on the northern coast of West Java, it is the center of government, commerce and industry and has an extensive communications network with the rest of the country and the outside world. Strategically positioned in the archipelago, the city is also the principal gateway to the rest of Indonesia. From the Capital City, sophisticated land, air, and sea transport is available to the rest of the country and beyond.

Jakarta is one of Indonesia's designated tourist areas. It is a gateway to other tourist destinations in Indonesia and is equipped with all the means of modern transportation by air, sea, rail, or by land. It has the largest and most modern airport in the country, the most important harbor in Indonesia and is well connected by rail of good roads to other destinations in Java, Sumatra, and Bali. As Indonesia's main gateway, Soekarno-Hatta International Airport serves a growing number of international airlines and domestic flights. Jakarta is a city of contrasts; the traditional and the modern, the rich and the poor, the sacral and the worldly, often stand side by side in this bustling metropolis. Even its population gathered from all those diverse ethnic and cultural groups, which compose Indonesia, are constantly juxtaposed present reminder of the national motto; Unity in Diversity.

Finding its origin in the small early 16th century harbor town of Sunda Kelapa, Jakarta's founding is thought to have taken place on June 22, 1527, when it was re-named Jayakarta, meaning Glorious Victory by the conquering Prince Fatahillah from neighboring Cirebon. The Dutch East Indies Company, which captured the town and destroyed it in 1619, changed its name into Batavia and made it the center for the expansion of their power in the East Indies. Shortly after the outbreak of World War II, Batavia fell into the hands of the invading Japanese forces that changed the name of the city into 'Jakarta' as a gesture aimed at winning the sympathy of the Indonesians. The name was retained after Indonesia achieved national independence after the war's end.

Go to Candidasa in the east of Bali, stopping on the way to visit a fishing village with salt-making huts and colorful fishing boats. Visit the Mother Temple of Bali, Besakih; the most important on the island. Take a drive through scenic back roads to a village to see locals do their traditional weaving. Trek to Besakih village; home to the first inhabitants of Bali: the Aga people. Explore the less-visited province of Karangasem. First stop is the sacred water palace of Tirta Gannga.

Next is Amed, a seaside village with an interesting, black rock beach, where you’ll cruise in a traditional Prahu boat to view the amazing coastal scenery. Relax on the beach at Lovina. See the ‘floating’ temple of Ulun Danu, set in the middle of a scenic lake.

Continue to the lakes of Buyan and Tamblingam, where you can stop to take photos. Stay in and trek through remote Munduk, passing plantations growing avocado, vanilla, coffee and cloves. Drive along one of the most scenic roads in Bali, past jungle-covered mountains and rice terraces. Enjoy the beautiful views of your hotel’s surrounds. Get on your bike for a two hour ride along a narrow village track down to Bali’s west coast. Enjoy the afternoon relaxing at your bungalow or on the black, sandy beach.

Drive to see Bali’s most famous temple, Tanah Lot; set on a small island in the sea: an iconic sight. Go to a village and support a community-based tourism project. Visit the village elementary school; then get ready to harvest, plant or transplant rice. Go to a nearby village in the evening to see a performance of traditional Balinese dance. Take an early morning stroll through the beautiful, tranquil, terraced rice fields of Ubud. Drive past lush rice paddies to Mt. Batur; the most active volcano in Bali.